There has been a drastic change of the entrepreneurs’ moods. All of the components – economic situation, investment, labour market – have gone up sharply. “It is a drastic change of the trend. It may also be an abreaction after the propaganda claiming that under the rules of PiS cows would stop giving milk and stones would cry to the skies” – said Cezary Kaźmierczak, the President of ZPP.

Union of Entrepreneurs and Employers has again advanced entrepreneurs and asked their opinion on the economic situation in Poland. The general index went up by 10 points – value of the index reached 48.1 in the second half-a-year of 2017. To compare, in the first half-a-year of 2017 it was 38.38 points. We can notice a growing tendency of all of the Index’s components. In the current research, the component of Economic Situation reached  47.83 points (33.22 points in the 1st half-a-year). The component of Labour Market increased from 52.52 in the last study to 56.33 points in the current one. Finally the component of Investment reached 41.39 points (38.42 points in the previous research). 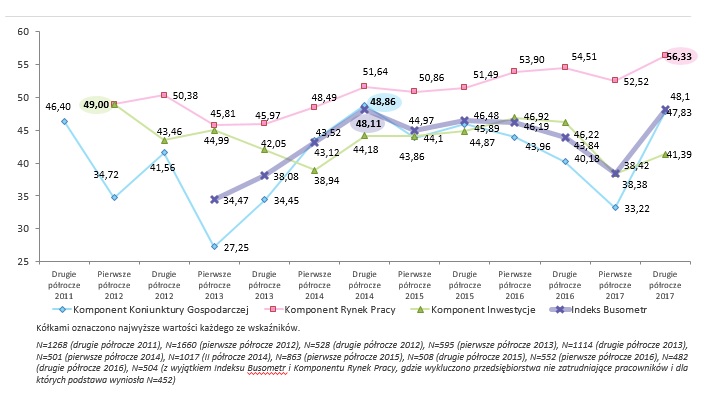 Chart. Busometr Index – comparison of the components in the function of time

The value of the Index is influenced by i.a. “the economic situation” component. In the current research, it reached 47.8 points. According to 29% of the entrepreneurs, the economic situation in the next 6 months will improve, 33% anticipate deterioration of the situation. The rest (38%) believe no significant change will occur.

No matter the size, region, sector or time on the market, the moods within the “labour market” area are optimistic – the index’s value is 56.3 points (over 3 points more than in the previous research). 29% of the entrepreneurs plan to increase the number of their employees, and 32% want to augment remunerations in their companies. The value of the barometer of labour market in the part “remunerations” is 57,7 points.

The situation in the labour market shows that we do have an employer’s labour already. The pressure on remunerations will grow, and so will the pay rises in a much bigger scale than during the last year. In the investments – if the trend lasts and Polish ant hill will follow, we can anticipate even 5% growth of GDP – says Cezary Kaźmierczak, the President of ZPP.

Significant changes may be observed within the “investment” component – the newest rank is 41.4 points (there is a slight growth of 2.98 points in relation to the last research). 47% of the respondents declare that they will invest during the next 6 months. Such tendency may be observed among the entrepreneurs from the sector of medium and big enterprises (53.3 points), a little less optimistic are the entrepreneurs from the micro and small enterprises (accordingly: 34.8 and 47.6). Readiness for investing is especially visible in the East part of Poland (the Index reaches 59.9 points). In the rest of the country, this components do not exceed the border value of 50 points.

Chart. The  “Investment” component  and regions

***
Busometr ZPP – An Index of the Economic Moods in SME sector. It shows the level of optimism of SME entrepreneurs, and their planned actions for the coming half-a-year.

Value of the Index is shaped by three components: (1) economic situation, (2) labour market (remunerations and employment) and (3) investment.

Value of each component ranges from 0 to 100 points.

Union of Entrepreneurs and Employers together with a Research House Maison conduct the research among a representative, in terms of number of employees (up to 250), sample of small and medium enterprises in Poland. Busometr ZPP is issued every half-a-year.

Small and medium enterprises in Poland constitute 99.8% of all of the companies in the country, they generate ¾ of the work places and 67% of GDP.