The European Union Emissions Trading System (EU-ETS) was launched in 2005 and was updated several times in subsequent years. The existence of this market was supposed to be an incentive for the Member States to choose more sustainable energy sources and decarbonise the European economy. As part of the Fit for 55 package, the European Commission has adopted a legislative proposal to revise the EU Emissions Trading System (ETS) with the intention of adapting it to meet the objective of a 55 % reduction in net greenhouse gas emissions in the EU by 2030 (compared to 1990 levels).

At the same time, the price dynamics for European Union Allowance (EUA) have increased significantly over the past few months. The price of emission allowances (EUA price) sold under the EU Emissions Trading System (ETS) has risen from under EUR 30 per metric tonne of coal in 2020 to over EUR 90 by the beginning of 2022. 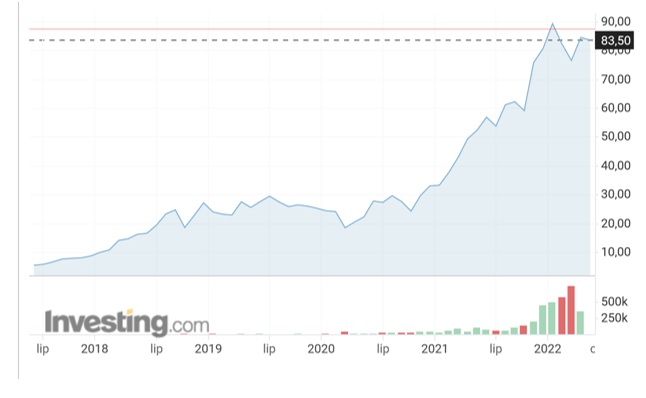 The Union of Entrepreneurs and Employers has, over the past few quarters, systematically prepared and circulated among the organisation members a report aimed at a cyclical analysis of the specifics of transactions on the EU-ETS market, including in terms of speculator participation.

In March this year, the European Securities and Markets Authority (ESMA) – following numerous critical opinions regarding the speculative rising of EUA prices on the EU-ETS market – issued a report on the state of the carbon market in the European Union. According to the report: “The analysis has not identified any serious shortcomings in the functioning of the EU market for emission allowances, based on the available data. However, the market analysis conducted by ESMA has led to a number of recommendations to improve the transparency and monitoring of this market.“

And while the conclusions of the ESMA report are not satisfactory for those in favour of excluding speculators from the EU-ETS market, the authors themselves acknowledge that recently there is a growing interest in this market on the part of entities such as investment funds. Among other things, it was their speculative activities that have led to an intense increase in the price of this instrument over the past several months, which in turn has translated into a dramatic rise in energy prices.

The ZPP report entitled “EUA: PRICE BUBBLES AND THE COMPETITIVENESS OF POLAND AND THE EUROPEAN UNION” clearly shows that the EU-ETS market is subject to a very high risk of price bubbles. The microeconomic characteristics of the market for CO2 emission allowances have not changed during the past year. The same flaws and weaknesses that have been highlighted for a year are still present. However, it is worth noting the change in narrative that has taken place over the last few months. In the spring of 2021, the possibility of price bubbles forming on EUAs was mentioned by a few, and their voices were ignored by the energy mainstream. Today, the subject is regarded quite differently by the public opinion, with more and more experts noting that this phenomenon is now real.

The European Parliament is holding a debate on the possible exclusion of financial entities from the EU-ETS, which is supported directly by ZPP through Vice-President Marcin Nowacki’s involvement in the work of the European Economic and Social Committee (EESC).

The report is the last in a series of quarterly monitorings of the situation on the market for CO2 emission allowances. This is the fourth version of the document, distributed exclusively to ZPP members. The current edition includes updated econometric modelling for Q1 2022. In the conclusions, we additionally focused on how the formation of price bubbles influences the competitiveness of Poland and the EU. We will continue monitoring the topic and following market behaviour and regulations in this area. We therefore encourage you to stay in touch with us. If you are interested in the report or the issues it addresses, please send a message to biuro@zpp.net.pl.