On 27 January, a debate with Maroš Šefčovič, Vice-President of the European Commission responsible for interinstitutional relations and forecasting took place. Šefčovič presented the Commission’s work programme for 2021. Marcin Nowacki raised the issue of passing on the burden of the digital tax on to consumers and SMEs. He asked Šefčovič whether the Commission foresees any measures to evaluate the cost of digital regulations.

In addition, Nowacki raised the question of logistical and legal challenges related to the carbon adjustment border mechanism. He noted that the design of the levy essentially requires a determination of the carbon emissions associated with each product, and asked whether the Commission is prepared for the difficulties arising from disclosing the details of supply chains. 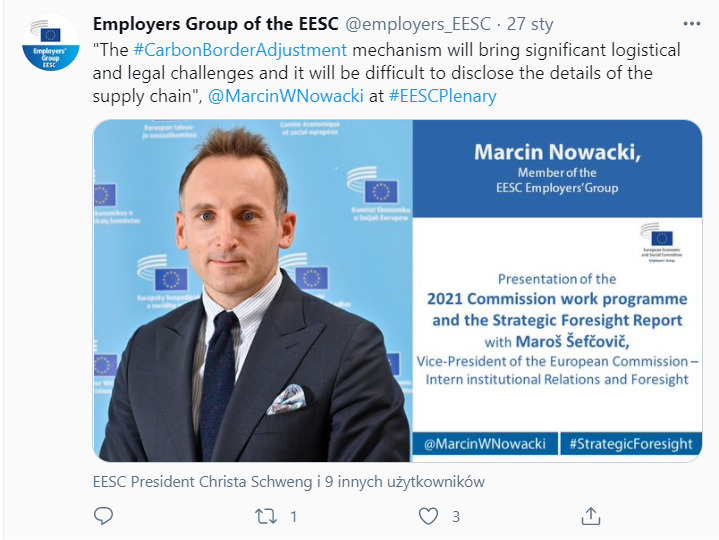 Also on 27 January, a meeting took place with António Costa, Prime Minister of Portugal, who presented the priorities of the current Presidency of the European Council. Tomasz Wróbleski inquired about the legitimacy of ambitious social goals during the economic crisis caused by the coronavirus pandemic. 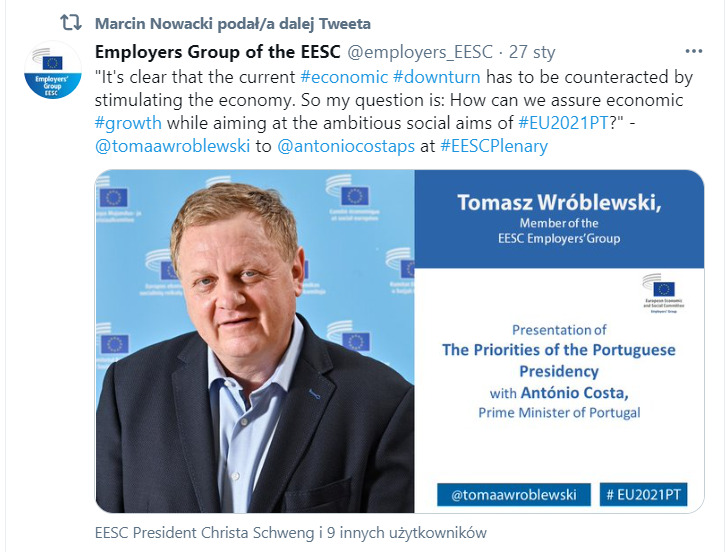 EESC members are also active in the regulatory field. The EESC issues opinions on subjects referred to it by the EU institutions. In addition, EESC members can propose the adoption of own-initiative opinions.

Marcin Nowacki has become rapporteur for the EESC opinion on the EU Strategy to harness the potential of offshore renewable energy for a climate neutral future, prepared by the Section for Transport, Energy, Infrastructure and the Information Society (TEN). The Offshore Strategy defines EU priorities for the next 30 years and sets very ambitious targets, according to which the share of offshore wind energy in the EU energy mix in 2050 will exceed 16%.

Additionally, Mr Nowacki tabled three own-initiative opinion proposals. The first opinion proposal concerns support and cooperation of the European Union with Belarusian entrepreneurs, workers and civil society. It aims to provide an expert assessment of the current situation in Belarus from the perspective of civil society and the expectations of Belarusians regarding the actions of the European Union. It could help the relevant EU institutions decide how best to target and direct EU support and, in the long term, lay the foundations for future EU-Belarus relations.

The second proposal for an opinion is related to the assessment of the integration process in light of the Association Agreement between the European Union and Ukraine. The aim of the opinion is to formulate practical recommendations that will bring the views of civil society closer and help the EU institutions to increase the effectiveness of the EU-Ukraine Association Agreement.

More information about the EESC

The European Economic and Social Committee (EESC) is an EU advisory body comprising representatives of employers’ and workers’ organisations and other interest groups. It issues opinions on EU issues to the European Commission, the Council of the EU and the European Parliament, thus acting as a bridge between the EU’s decision-making institutions and EU citizens.

What does the EESC do?

It gives the interest groups a formal say on EU legislative proposals. Its three key tasks are to:

What is the EESC composition?

The EESC has 329 Members from all EU Member States, who are appointed for a renewable five-year term of office. Members are nominated by national governments and appointed by the Council of the European Union. They are independent and perform their duties in the interest of all EU citizens. The number of Members per country is in proportion to the country’s population.

How does the EESC work?

The EESC is consulted by the European Parliament, the Council of the EU and the European Commission on a variety of subjects. It also issues opinions on its own initiative.

Members work for the EU, independently of their governments. They meet 9 times a year. Opinions are adopted by a simple majority vote.

Meetings are prepared by the EESC’s specialized sections and the consultative commission on industrial change. The EESC’s specialist think-tanks (known as ‘observatories’) track the progress of EU strategies.

The EESC keeps in touch with regional and national economic and social councils throughout the EU – mainly to share information and discuss particular issues.

Survey by the Union of Entrepreneurs and Employers:Pawnshop market is growing fast

While the number of consumer loans granted by banks and companies specialising in loans is declining, and the government is tightening regulations for the financial industry, the pawnshop sector is booming. According to the first ever report on pawnshops in Poland by the Union of Entrepreneurs and Employers: although pawnshops provide cash loans against a pledge, they are circumventing the provisions of the Consumer Credit Act…