On February 24-25, the EESC plenary session held a debate on the conference on the future of Europe with the participation of Dubravka Šuica, Vice-President of the European Commission for Democracy and Demography. In addition, Committee members adopted a resolution “Organized civil society involvement in national recovery and resilience plans – what works and what does not?”  according to which that it is important to ensure that the real challenges of public health and economic and social recovery are at the heart of decisions and policies for growth.

On February 18, 2021, a first meeting of the study group for offshore renewable energy strategy was held. The rapporteur for the EESC opinion on this strategy is Marcin Nowacki. The main element of the meeting was the discussion on the working document on the EU Strategy aimed at using the potential of marine renewable energy for a climate-neutral future. Furthermore, in its opinion, the EESC expressed its disappointment in the lack of specific measures and instruments for financing offshore wind energy projects. The Committee also indicated that each investment in offshore wind farms should contribute to the greatest possible extent to the socio-economic development of regions in the immediate vicinity of a given investment, by supporting participation in a given project, the so-called local content factor. 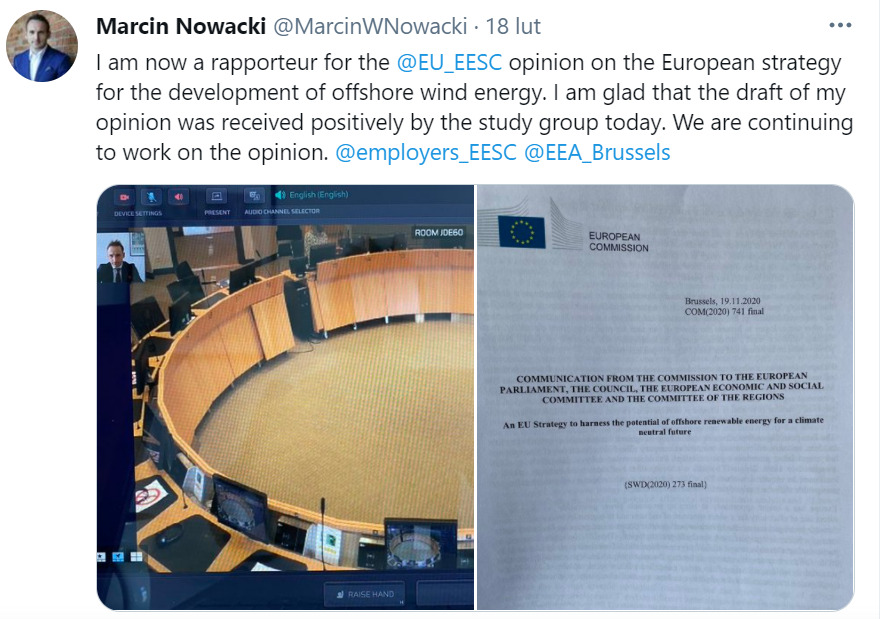 Tomasz Wróblewski became the rapporteur for the EESC opinion on the European economic and financial system: fostering openness, strength and resilience.

The aim of the proposed strategy is to strengthen the role of Europe in the global financial system, as well as to strengthen the resilience of EU economies against currency crises, reduce dependence on other currencies and ensure lower transaction costs, financing and risk management, while protecting the EU against unfair practices and abuses.

Moreover, the proposal for an opinion on the support and cooperation of the European Union with Belarusian entrepreneurs, workers and civil society, which was proposed by Nowacki in January, was accepted by the EESC Bureau, which decided to prepare its own opinion on this matter.

More information about the EESC

The European Economic and Social Committee (EESC) is an EU advisory body comprising representatives of employers’ and workers’ organisations and other interest groups. It issues opinions on EU issues to the European Commission, the Council of the EU and the European Parliament, thus acting as a bridge between the EU’s decision-making institutions and EU citizens.

What does the EESC do?

It gives the interest groups a formal say on EU legislative proposals. Its three key tasks are to:

What is the EESC composition?

The EESC has 329 Members from all EU Member States, who are appointed for a renewable five-year term of office. Members are nominated by national governments and appointed by the Council of the European Union. They are independent and perform their duties in the interest of all EU citizens. The number of Members per country is in proportion to the country’s population.

How does the EESC work?

The EESC is consulted by the European Parliament, the Council of the EU and the European Commission on a variety of subjects. It also issues opinions on its own initiative.

Members work for the EU, independently of their governments. They meet 9 times a year. Opinions are adopted by a simple majority vote.

Meetings are prepared by the EESC’s specialized sections and the consultative commission on industrial change. The EESC’s specialist think-tanks (known as ‘observatories’) track the progress of EU strategies.

The EESC keeps in touch with regional and national economic and social councils throughout the EU – mainly to share information and discuss particular issues.

Digital Markets Act Round Table by the Union of Entrepreneurs and Employers: how to make the DMA a “scalpel” and not a “road roller”?

The Digital Markets Act is a proposal presented by the European Commission for a regulation imposing additional restrictions, obligations, and bans on a group of digital companies referred to in the DMA as “gatekeepers”. Participants of the round table hosted by the Union of Entrepreneurs and Employers, which took place on Thursday, 8th April 2021, discussed the Polish government’s position regarding the regulation, the challenges related to its possible future application, as well as the doubts related to its practical effects…

Over 30 business organisations and think tanks appeal to the government: yes to a tax wedge reform, no to choking the middle class

As many as 33 organisations signed an appeal to the government regarding the planned amendment of the labour taxation model. The authors of the document emphasised the necessity of a rational debate regarding the tax wedge and drew attention to the threats arising from some of the directions of changes that were postulated. Among the signatories of the appeal, there are five representative employers’ organisations, four think tanks, over a dozen industry organisations and numerous local employers’ organisations. The appeal was initiated by the Union of Entrepreneurs and Employers…