High non-wage labour costs, high taxes, and excessive bureaucratic obligations – these are the obstacles considered most harmful for running a company in Poland. These are the conclusions from a survey conducted by Maison & Partners on behalf of the Union of Entrepreneurs and Employers.

It ought to be emphasised that the survey beginning with this edition is carried out on a different business base (previously the database of the Union of Entrepreneurs and Employers, presently of the Ariadna National Research Panel). The sample structure in terms of the size of the companies surveyed in this measurement and the previous ones does not differ, but the demographic structure of respondents has changed considerably. This change may be to a large extent the effect of methodological modification and not of actual differences in the perception of barriers in recent years by Polish entrepreneurs.

The Union of Entrepreneurs and Employers once again asked entrepreneurs from the SME sector about the biggest obstacles for business activity in Poland. In the catalogue of the largest barriers, one can find the following: 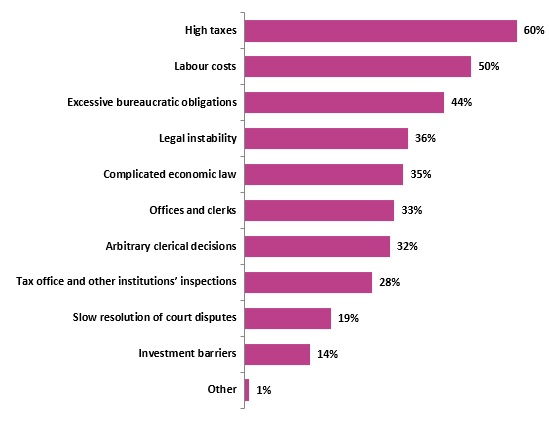 Maison & Partners for the Union of Entrepreneurs and Employers, January 2019, N: 733, survey conducted among a group of the SME sector companies representative in terms of workforce size (up to 250 employees).

The most commonplace barriers are a much bigger problem for microenterprises than companies with a larger workforce, as well as for enterprises from the services sector than those from trade and production.

Entrepreneurs arranged the above barriers, pointing out those they considered most challenging in terms of running a business. On the TOP2 barriers list, there are high taxes (57%) and labour costs (52%).

According to the presented data, 88% of respondents consider unclear legal provisions as a definitely essential barrier to the development of enterprises in Poland. Subsequently, administrative requirements (87% of respondents) and lack of financial resources (86% of respondents) are considered equally harmful in this respect.

“It is indeed worrying that the catalogue of barriers to conducting business, which entrepreneurs consider the most challenging, is basically not changing,” claims Cezary Kaźmierczak, president of the Union of Entrepreneurs and Employers. “From the very beginning, the most annoying factors in view of entrepreneurs are the tax system, labour costs, bureaucracy and a complicated, unstable regulatory environment. And we must remember that micro-entrepreneurs experience these problems much more intensively than larger entities. We have published countless reports and positions on each of these topics and we see some changes going in the right direction, but it is still too little and too slow.”

64% of people asked about the most important reasons for not employing more people in small- and medium-sized enterprises pointed to the lack of financial resources, for example, too high employment costs.

Too low profits caused by the lack of financial resources are also a major obstacle for small- and medium-sized enterprises to invest their capital. As many as 48% of respondents say so.

Lack of financial resources is also perceived as the biggest obstacle at the start – almost half of Polish entrepreneurs (47%) believe that the lack of money is the main barrier to starting their own business.

Due to the fact that the above-mentioned lack of financial resources is considered by entrepreneurs to be the greatest obstacle to starting their own business, it is the state’s financial aid according to entrepreneurs (53%) that could encourage them to establishment their own businesses. Another important incentive would be an extended payment period of the preferential social security premium according to 43% of respondents.

“I would recommend the government to have a good look at this study instead of inventing ‘entrepreneur’s tests’ and limiting the possibility of making use of the flat tax rate when self-employed. Improving the business environment will serve everyone and I can guarantee that the state budget would quickly feel the results thereof,” concludes Cezary Kaźmierczak.

04.04.2019 Survey by the Union of Entrepreneurs and Employers: Barriers to running business activity in Poland

Digital Markets Act Round Table by the Union of Entrepreneurs and Employers: how to make the DMA a “scalpel” and not a “road roller”?

The Digital Markets Act is a proposal presented by the European Commission for a regulation imposing additional restrictions, obligations, and bans on a group of digital companies referred to in the DMA as “gatekeepers”. Participants of the round table hosted by the Union of Entrepreneurs and Employers, which took place on Thursday, 8th April 2021, discussed the Polish government’s position regarding the regulation, the challenges related to its possible future application, as well as the doubts related to its practical effects…

Over 30 business organisations and think tanks appeal to the government: yes to a tax wedge reform, no to choking the middle class

As many as 33 organisations signed an appeal to the government regarding the planned amendment of the labour taxation model. The authors of the document emphasised the necessity of a rational debate regarding the tax wedge and drew attention to the threats arising from some of the directions of changes that were postulated. Among the signatories of the appeal, there are five representative employers’ organisations, four think tanks, over a dozen industry organisations and numerous local employers’ organisations. The appeal was initiated by the Union of Entrepreneurs and Employers…