The Union of Entrepreneurs and Employers is concerned that initiatives aimed at harmonizing tax regimes on a global scale might be detrimental
to the competitiveness of the Polish economy. Moreover, the proposals to establish a global minimum CIT tax are unlikely to solve the problem of tax base erosion
and the use of aggressive optimization mechanisms. Thus, we believe that a much more appropriate direction is to replace the corporate income tax with a low-rate sales tax.

On July 1, 2021, Poland, along with 129 other countries of the world, issued a joint statement on the willingness to develop new rules for taxing large international enterprises, including the taxation of Big Tech. As a result of over two years of work at the forum of the Organization for Economic Co-operation and Development (OECD), solutions are divided into the so-called two pillars.

The First Pillar consists of activities aimed at developing new rules concerning the place of income taxation and new rules for allocating income to individual countries in which the activity is carried out. On the other hand, the Second Pillar assumes the creationof a global minimum CIT tax. The minimum tax rate on the income
of multinational companies has been set at least 15 percent but may be increased as international negotiations progress on the implementation of Pillar Two.

In our view, the implementation of these initiatives will hit the competitiveness of the Polish economy.

Poland has one of the lowest effective CIT rates in the European Union, amounting to 15.3%. The chart below shows the inverse relationship between the inflow
of foreign direct investment and the amount of the effective corporate tax rate. In other words, international capital tends to migrate to jurisdictions with lower CIT rates. 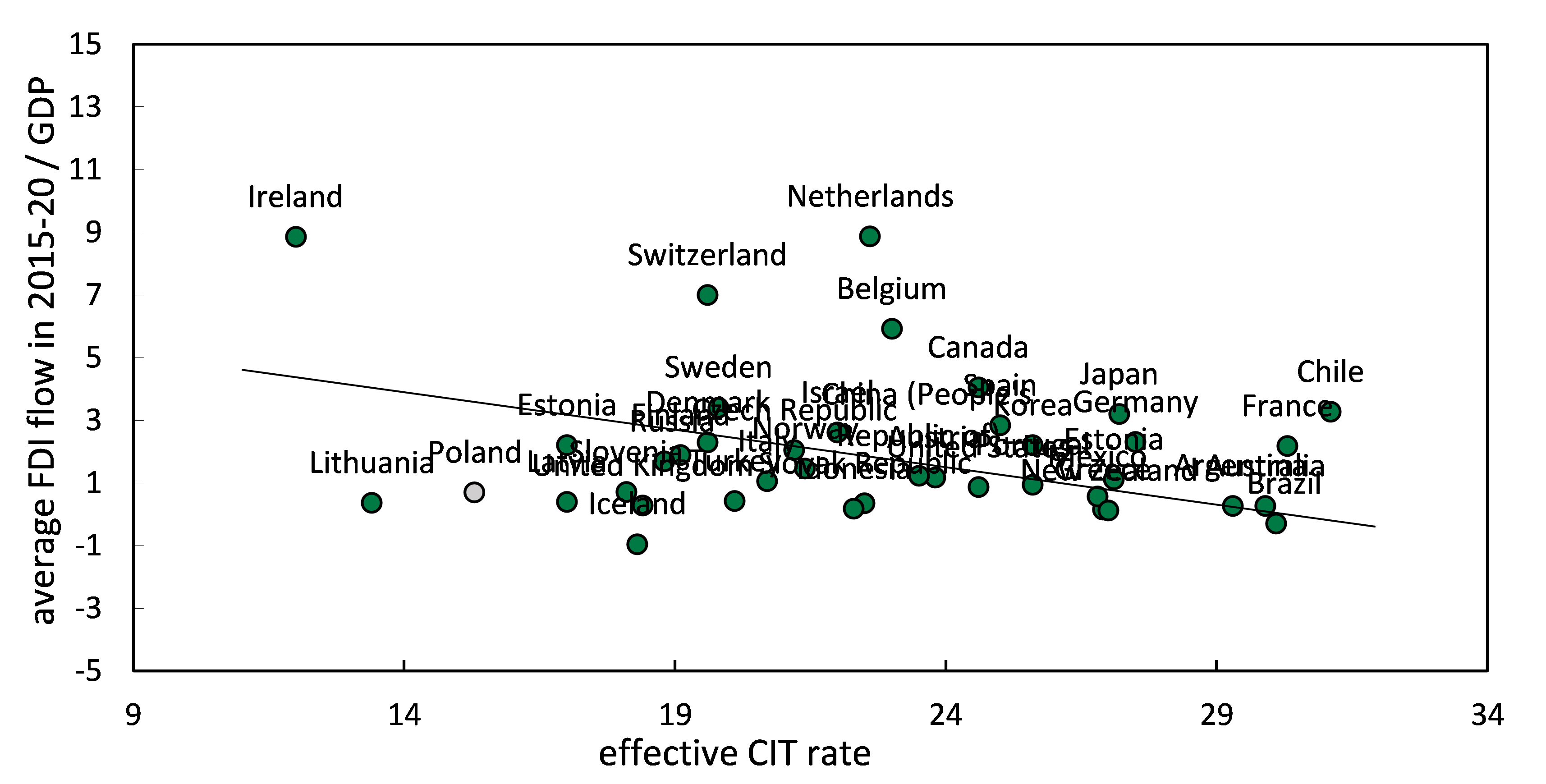 The inflow of foreign capital, referred to as Foreign Direct Investments (FDI), results in the transfer of technology to the country receiving capital, contributes to the development of the local labour market, and the integration of international trade. Moreover, it helps to create a more competitive business environment and accelerates the development of enterprises.

All the above-mentioned effects translate into higher economic growth, which is the most effective tool for reducing the economic distance between developed countries and developing countries, including Poland. It should be mentioned in this context that the so-called FDI played a key role in generating growth in the economies of the former socialist bloc. Countries such as Estonia, Poland, Czech Republic, and Slovenia, in the period of economic and political transformation, offered preferential CIT rates as an additional magnet to attract multinationals.

The proposed reform introducing the so-called global CIT will take away the so-called emerging countries their predominance in the form of preferential tax rates. Thus, the beneficiaries of the proposed solutions will be primarily the richest countries with an established position, which do not have to compete with the amount of tax burdens. The projected, additional tax revenues will mainly go to countries where international corporations eligible for the minimum CIT is their headquarters.
In addition to the direct fiscal effects of the global CIT agreement on national budgets, one should also bear in mind the indirect effects of global taxes, such as shifting the burden of additional liabilities onto employees of multinational corporations or consumers, or a decline in the profitability of international investments.

To sum up, the solution consisting in establishing a minimum rate of global CIT tax is an instrument favoring the most developed countries with a strong, established position in the global economic landscape. The adoption of the above rule will largely negatively affect the interests of small countries, or those whose economies have been based on free-market principles for just a few dozen years, and thus have not managed to develop an appropriate position on international markets.

Therefore, taking into account the above, we believe that Poland should retain the ability to compete in the tax system with other countries because as a motor of economic development.. Moreover, the introduction of the international tax regime will have a destructive effect on the domestic economy due to the decline in Foreign Direct Investments. It should be noted that along with capital from abroad, we also receive organizational culture and know-how, thanks to which our industry participates in the process of technological transformation, and is also an important element of global supply chains.

The ZPP emphasizes that the actions of states to limit tax avoidance and evasion must take a positive dimension to a greater extent, attracting taxpayers
and entrepreneurs not only with the amount of levies but also with the simplicity and transparency of the entire tax system. The occurrence of tax competition causes countries to strive to improve the quality of the adopted law or to develop tax mechanisms supporting entrepreneurship.

We believe that the shaping of tax policy should unconditionally remain the sovereign matter of each country, as only such an approach can reflect both the needs
and fiscal capacity of each country. On the other hand, the state of affairs in which there is natural competition between states as tax jurisdictions with varying degrees of attractiveness is a welcome phenomenon as it stimulates global economic growth.

Regardless of the above considerations, we point out that the proposals resulting from the project lasting more than two years, carried out as part of the OECD’s work, will probably not solve the most important problem, which is the erosion of the CIT tax base. Thus, the introduction of sales tax seems to be a much more effective solution, the more so as EU law does not contradict this idea.

The Union of Entrepreneurs and Employers is concerned that initiatives aimed at harmonizing tax regimes on a global scale might be detrimental to the competitiveness of the Polish economy. Moreover, the proposals to establish a global minimum CIT tax are unlikely to solve the problem of tax base erosion and the use of aggressive optimization mechanisms.

The Union of Entrepreneurs and Employers (ZPP) has launched a Contact Point for Entrepreneurs from Belarus, the purpose of which is to provide comprehensive organisational assistance to Belarusians interested in investing in Poland, including temporarily relocating their business. The project is a joint venture with the city of Łódź…

Polish entrepreneurs are hoping that the CJEU will recognize the so-called „VAT paid sooner” (PL: szybki VAT) on intra-Community acquisitions of fuel, which is a pillar of the government’s regulatory package known as the “fuel package”, as compliant with EU law